The Nordend Peak is the second higher top of Monte Rosa. It is the farthest of the four peaks.
After some try, in 1861, Buxton and Cowell, with the guides Payot e Binder, reached the top passing by the Silbersattel. The first ascent from the Saint-Catherine ridge was made only in 1906. The group with the brothers Lochmatter and Ryan did not use the nails, an exceptional exploit for that period.
The Silbersattel is the pass that separate the Nordend from the Dufour. From here pass all the usual ways if you come from the Monterosa Hutte, the Swiss hut, or from Capanna Margherita. From that one you go down to the Gnifetti pass, you climb up the Zumstein and the Dufour and you go down to the Silbersattel. Here there is the ridge that leads to the top. This is the crossing of the four big tops of Monte Rosa.

Itinerary
You will reach the Mantova hut from Indren point and you will spend there the night. The next morning, you climb up the glacier up to the Gnifetti hut. On the left you will see the Pyramid Vincent and after that the Balmenhorn with the statue of the Christ (an important point of reference). In case of bad weather or need on the Balmenhorn you will find the bivouac Giordano. Always on the right you will see the Schwarzhorn and you continue till the large plateau of the Lys Pass. Here you are in the middle between Capanna Margherita and Gnifetti hut. You leave on the right Ludwigshöhe and you follow the track that goes along the Parrot. At the end of a steep rise you reach the Gnifetti pass and you continue on the right. A last diagonal track leads to the Capanna Margherita, where you will spend the night. The next morning you go down to Gnifetti pass where, on the opposite side, you follow the ridge track on the left till the Zumstein top. You go down very carefully on the ridge till Zumstein Pass, also called Pope Pass, where the ridge goes up. The track on the snow ends and you continue on the red rock. On the Dufour top you will find a metal cross. You go down on the opposite face on a very steep slope. You follow the track on the right and cross the Silbersattel. You continue till the south ridge of Nordend, you climb till the end and you reach the Nordend top. On the way down you follow the same path till the Gnifetti pass and you continue on the right till Lys pass. You follow the the same track of the day before back to the Mantova hut, where you stop for a pleasant meal. 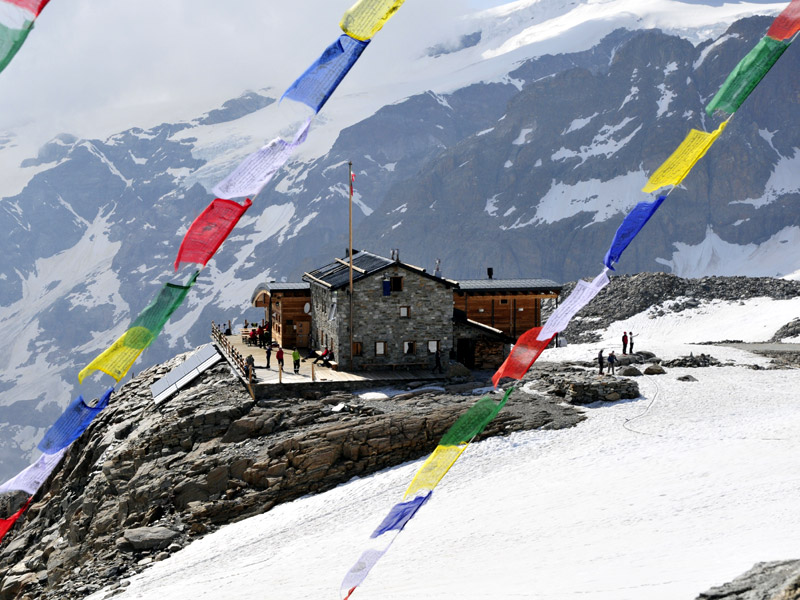